In it for the ultra long-haul 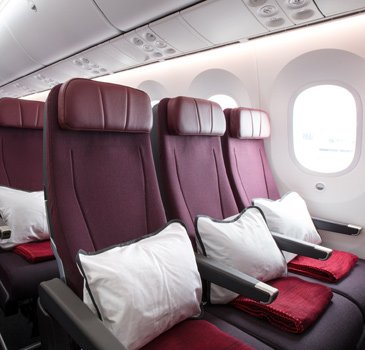 PRE-DEPARTURE: I have to admit I boarded this flight with dread. Ultra long haul sounds cool and the time saving benefit of a non-stop flight to Australia had unquestioningly encouraged my booking, but faced with the reality of up to 17 hours confined largely to an Economy seat, it really did not appeal.

THE SEAT: First impressions weren’t great. While staff were friendly and looked great – bright uniforms, fresh cheery faces – the Business cabins had a serene calm and PE passengers a steely ‘we’re ready for this’ look, my seat in a row 55 took me deep into Economy. Here the usual chaos of baggage, bodies and belongings filled me with a certain sense of panic. However once we’d all carved out our small territories, juggled pillows, books, backpacks, babies and neck pillows in to place, things soon started to improve.

The seat itself had a slight recline and netted footrest plus adjustable headrest/support. The back-of-the seat touchscreen was like an enlarged iPad and could tilt to improve the viewing position. Below was a charging doc and storage shelf which doubled as an iPad holder if you’d brought your own. The table had a half and full option and there was an additional charging socket in the arm rests.

THE EXPERIENCE: The Dreamliner was clean and new and the sculpted overhead bins seemed to give a sense of height and space. Windows are bigger and ‘mood’ lighting adds to the ambience. Being in the centre aisle of the 3-3-3 configuration meant there was no scenic view but on the plus side I was free to come and go to the toilets or for a stretch as I pleased, and circulated often. Take-off was slightly later than scheduled but not enough to impact the 16.40 hours scheduled flying time. Take-off was smooth and the aircraft was noticeably quieter.

THE CATERING OFFER: The first six/seven hours were a breeze. A drinks service, with rice snacks, came twice with dinner (if you put yourself on Perth time) served about three hours in.

The chicken sounded nice and since I was focused on the well-being credentials of the flight, was going to be my choice but it was all gone by my row. The alternative beef bourginon which was tasty enough, was served with carrots, beans, some somewhat uninspired potatoes and a garlic roll. The tableware seemed a bit minimalist too. A small melamine half tray was presented onto which sat the hot meal and cutlery pack, with the dessert set directly onto the table beside the tray and the roll likewise, on a serviette. It was all tasty if lacking in wow factor although the subsequent round of tea, coffee or hot chocolate with marshmallows and a kitkat, and then two rounds of ice lollies certainly ensured no one was hungry.

By hour seven the lighting had gradually dimmed and we were encouraged to sleep… babies permitting. Throughout the night the crew was readily, circulating with water, and a calzone (or bacon roll on the return leg) for those still awake. A well-stocked larder included cheese and biscuits, houmous and carrot packs, cereal bars, cake and apples for free grazing.

Lights came up for breakfast three hours out, and the fruit plate, Greek yoghurt and muffin were all excellent. A hot omlette, sausage, bacon and spinach was also available and two rounds of tea/coffee.

THE VERDICT: The thought of this long flight was very much worse than the reality. The Dreamliner cabin environment really does seem to support wellbeing in the air. The atmosphere remained relatively fresh throughout, there was very little operational noise or distraction and the lighting helped create a pleasant environment throughout. The crew were great, nothing was too much trouble at any time and they were welcoming and understanding of anyone stretching or standing in their galley, where F&B extras were always available. Little was done to acknowledge the duration of the flight but perhaps Qantas simply want to establish this as a new normal. I disembarked feeling surprisingly good and certainly wouldn’t hesitate to take the routing again.

New approaches for a new world

Sales in the sky take off with Finnair