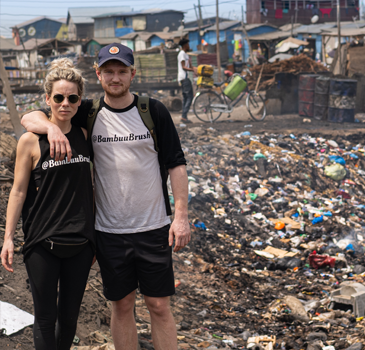 Tommie Eaton, founder at BambuuBrush, believes we cannot neglect the integral role social media is increasingly playing in our daily lives. Yes, he admits, there are continuous negatives arising from the amount of time that social media consumes each day but that also shows the power social media has, he argues…

What if we could harness the power social media has over us in a positive way to change the world for the better. Approximately 45% of the world’s population uses social media for on average 144 minutes a day according to a recent study which highlights the optimistic approach, that’what if’ we could grab hold of people’s attentions and inspire them to do good, be better, experience more. This is a mindset and’marketing strategy’ which I believe very few companies, organisations and individuals have used correctly but one which will become a highlighted area moving forward into the 2020’s.

My company, @BambuuBrush, is a UK based eco-focused company which has one simple product for One Simple Change, a bamboo toothbrush. We have sold over 1.4 million bamboo toothbrushes within our first year of trading, and achieved that using a #1millionby2020 social media campaign. When launching in February 2019 the goal was’to use social media in a positive way to educate, inspire and empower people by showing the impact plastic pollution is having on our planet’. We worked to create an online movement whilst using the platforms to deliver educational workshops, inspire people to make simple changes away from plastic, and organise and deliver community clean-ups. The crucial part of the story is that, all of this was achieved with zero investment, zero funding and zero spending on advertising. Social media is a free consumable.

But it’s not just about my business, take another relevant story of social media being used in a positive way, by Captain Tom Moore, the 99-year-old war veteran who wanted to raise ‘£1,000 for the NHS by walking 100 lengths of his garden. He has now hit over ‘£28.5 million in donations + ‘£5 million in Gift Aid. Now if that isn’t a true positive representation of the power of social media what is?

As always, there are new and more exciting technologies and in the ever changing world of social media, the most popular platforms will come and go. We have definitely seen a plateau in new users of Facebook, Twitter and Instagram over the last 12 months with the introduction of TikTok, but I personally believe that social media will become an increasingly integral part of life.

Social media will become increasingly engrained in our lifestyles like a sixth sense and there is no doubt that its power will grow because of this. So let’s encourage businesses, organisations and people to use the platforms in a positive way so we can make real, beneficial, impacts to our planet and the beautiful people on it.

In conversation with Nicolas Rondeau

In conversation with David Young