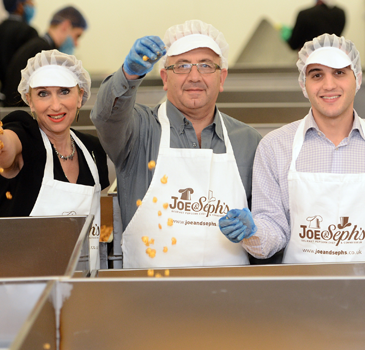 Popcorn specialist Joe & Seph’s has been recognised with a Queen’s Award for Enterprise in International Trade.

The company is one of 220 organisations nationally to be recognised with a prestigious Queen’s Award for Enterprise and was recognised for tripling its overseas sales in the last three years.

Joe & Seph’s remains a small family business and celebrates its 10th anniversary this year. It employs 60 people and was recently ranked 652 in the fastest growing companies in Europe listed by the Financial Times, and 32nd on the Sunday Times SME Export Track 100 2019. Its products are sold in 19 countries including Western Europe, Scandinavia, the Middle East, Singapore and Hong Kong.

Co founder of Joe & Seph’s, Adam Sopher, says: “We recognised early on that to be a successful business, future planning and thinking beyond the UK market was key. Our mission ‘to become the best tasting popcorn brand in the world’ has guided and defined the company’s export strategy and has become a major part of our business, generating over £1.7 million in revenue. It is an overwhelming privilege to be recognised by the Queen’s Award for Enterprise on our 10th anniversary year, we look forward to bringing the best of British to the world into the next decade and beyond!

“Joe & Seph’s launched in a recession and learned during this period that the businesses that succeed are the ones that not only have a premium, differentiated offering but also have strong export sales. Our strong focus on quality, innovation, flexibility and customer service has set us apart as the leading exporter of gourmet popcorn in the UK.”