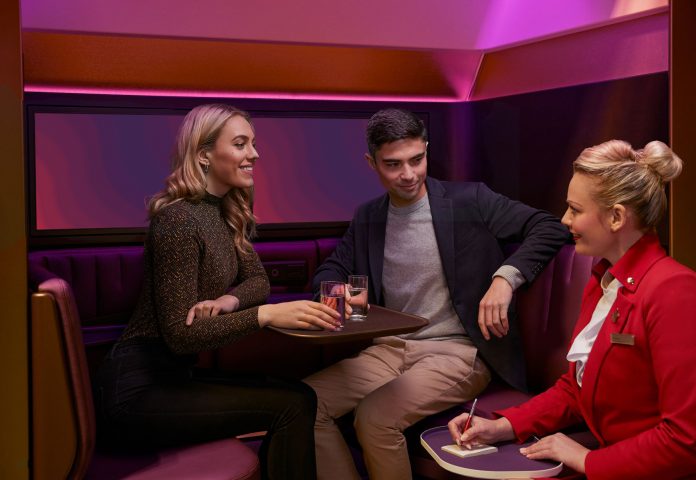 Virgin has added ‘The Booth’ onboard the new A350 in the Upper Class cabin, providing social seating for two.

The lounge style seating will include leather seats, a shared table and two 27” touch screen monitors. Content will be tailored to the route and time of day, with initial content to feature a digital art gallery profiling up and coming artists, plus a tail and belly cam of the aircraft. Two Bluetooth audio jacks will enable passengers to connect to the monitor’s audio.

Customers travelling between Heathrow and Orlando are planned to be the first to experience the newest aircraft, with the first flight currently scheduled for December 2021. Other destinations, including Barbados, will receive the new aircraft later in 2022.

The A350 also features the airline’s latest Upper Class suite design, which includes all window facing seats with a 44” pitch and fully flat 82” bed. Every cabin has the largest entertainment screens available on any Virgin Atlantic aircraft.

Corneel Koster, chief customer and operations officer at Virgin Atlantic said, “I’m delighted that we’ve curated The Booth specifically for our customers jetting off on holiday to our sunny destinations, such as Orlando, offering a truly stylish start to their trips.”

The first aircraft in the new Airbus A350 leisure fleet will be G-VEVE, named Fearless Lady, after Sir Richard Branson’s late mother Eve. Lady Emmeline (G-VLIB), which is inspired by the leader of the women’s suffrage movement Emmeline Pankhurst, will follow in April, with the final three aircraft set to be delivered by June 2023.