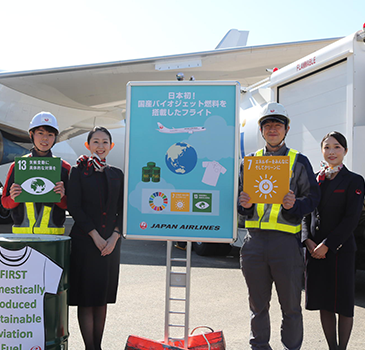 The product was a blend of traditional jet kerosene and SAF produced in Japan.

JAL is a recognised Eco-First company by the Ministry of the Environment of Japan. In October 2018, JAL launched a project to convert cotton clothing into SAF. During the project, 50 local companies helped collect approximately 250,000 pieces of clothing and with the technical support from Green Earth Institute Co. By using a bioprocess technology developed by the Research Institute of Innovative Technology for the Earth (RITE), a domestically produced SAF was successfully created in March 2020.