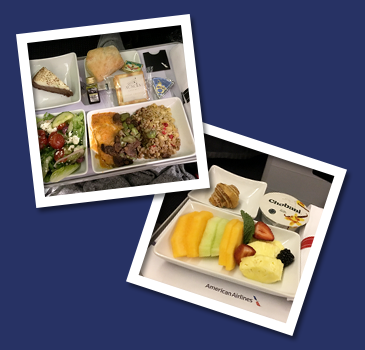 PRE-BOARDING: I was flying on the AA100 from New York’s JFK Terminal E to London Heathrow Terminal 3, departing at 6.15 and arriving at 06.50 (local times), and operated by a B777-300. I was unable to check-in online but the airline’s check-in area was efficient and straight-forward and the queue through security relative short. Boarding was done in seat location groups to ensure timely efficient loading.

THE SERVICE: I had pre-ordered my meal choice online and it was delivered quickly, so quickly in fact that I was half way through eating it before my drinks service arrived! But the meal was excellent with a good sized chicken portion served with a side salad and the best bread roll I’ve had onboard, plus a good chocolate dessert, cheese and crackers. All was presented well with ceramic crockery and linen napkin. A second drinks service was offered after trays had been cleared, and a breakfast of fruit plate, yoghurt and croissant was served just under an hour before arrival.

THE SEAT: A bottle of water and comfort pack (with Casper blanket and lumber pillow, Cole Haan amenity kit, and headset) were awaiting me in the seat. I travelled in seat 16D which has the extra leg room infront on the bulk head. The seat was roomy and controls for the recline and foot rest were simple. The screen was stowed within the seat but popped out easily and the IFE system offered a comprehensive choice. There was a small storage compartment and fold out tray stowed in the arm rest, plus a USB charging point.

THE VERDICT: The aircraft felt new and the Premium Economy seat definitely was comfortable and well thought through. The meal quality was excellent and the amenities given with the seat were good quality and useful, especially the lumbar pillow. The staff were efficient if a little brusque in their service but overall the journey was a good experience.