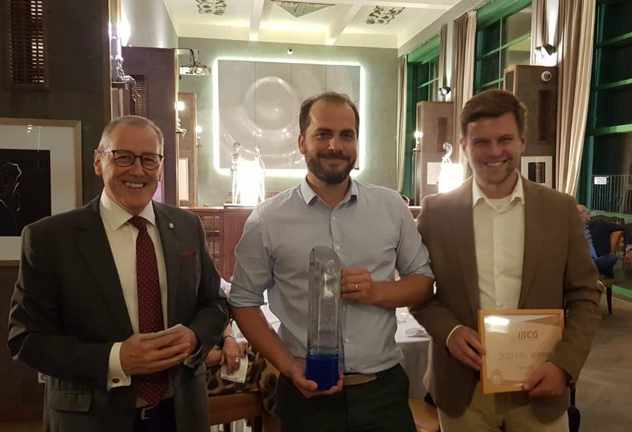 Newrest has been recognised by international rail caterers, winning their Most Innovative Caterer Award for digital innovation brought to the rail catering market.

The award, presented by the International Rail Catering Group (IRCG) at its conference, was secured for the work done to introduce a ‘McDonalds style’ click and collect menu display screens at key locations on TGV trains.

Roger Williams, of IRCG, said: “This concept provides easier product selection for customers, reduces queues at the bar, prioritises the orders for galley preparation and, importantly, has increased ATV’s. It so impressed fellow IRCG members that they voted it the winner and we were delighted to present the Newrest team with a wonderful crystal blue Bohemian glass trophy at our annual dinner in Prague.

This in-train ordering innovation was designed and implemented by the digital teams at Newrest’s headquarters in Toulouse.

Benoit Vignon, VP of Sales at Newrest was also appointed Vice President of the IRCG. and will sit alongside three other VPs and under the direction of Petr Pospisil (President) and Roger Williams (Chairman).

The IRCG represents the global rail catering market by bringing together all the major players in the industry. Members are railway companies, caterers, product suppliers and independent professionals. If you are interested in joining IRCG, either as a railway caterer or established product supplier, contact roger@thecateringexplorer.com or petr.pospisil@jlv.cz

Wising up to waste