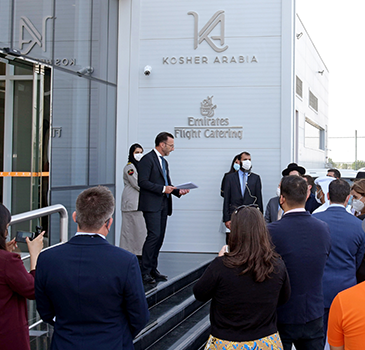 Kosher Arabia welcomed dignitaries and special guests for a Ribbon Cutting Ceremony to mark the official opening of their new facility.

Her Excellency, Marcy Grossman, Canadian Ambassador to the UAE and His Excellency, Ilan Sztulman, Israeli Consul General, cut the ribbon to mark the opening.

The ceremony included addresses from shareholder spokespeople from both Emirates Flight Catering and CCL Holdings focusing on the historical journey that led to this momentous occasion, followed by the traditional placing of the Mezuzah, a piece of parchment called a klaf contained in a decorative case and inscribed with specific Hebrew verses from the Torah, at the entrance of the facility by Rabbi Krakowski, head of OU’s Israel branch.

Kosher Arabia is certified by the Kashrut Division of the Orthodox Union (OU), which will work in partnership with the South African Union of Orthodox Synagogues (UOS) to provide the highest level of excellence in kosher certification to Kosher Arabia.

Guests at the ceremony were then taken on a guided tour of the facility to see operations in progress, the modern kitchens and to meet the team of chefs behind the kosher food production.

Matt Rickard, general manager at Kosher Arabia, said: “It is an honour to welcome such distinguished guests to the inauguration of this magnificent facility, this is not only a momentous occasion symbolically but also an important chapter for the industry as we formally begin food production to feed the appetite for brilliant kosher food here in the United Arab Emirates and around the globe.

Ross Kriel, CEO of CCL Holdings went on to say: “Four years ago, the idea of Kosher Arabia was born, with the aim to serve the best kosher meals onboard the best airline in the world. This proposition has now come to life. Seeing the facility officially open for operations, I couldn’t be prouder of my association with Emirates Flight Catering and the great Emirate of Dubai.”