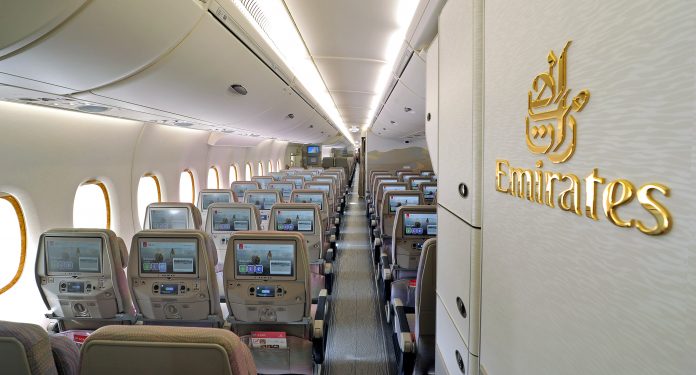 The flight: I flew from Dubai to London on Emirates flight EK0031, in Economy on an Airbus A380-800. Flying time was seven hours and 45 minutes.

Check in: Arriving mid-morning, I expected queues at check in. However this was far from the case, with Terminal 3 at Dubai Airport remarkably quiet. I opted for the self-service check in and bag drop, and was impressed to see a contactless option using a QR code to check in using my own device.The flight was completely full, but fortunately I was happy with my aisle seat allocation, and without a bag to check in I was through to security and out the other side in less than 15 minutes after arriving at the airport.

Boarding: I was in Group F – the first Economy group to board the plane. Despite a full flight, it was easy to find room for both my cabin bag and backpack in the overhead lockers, leaving plenty of space to stretch my legs under the seat in front of me. Whilst I was in Dubai, the mask mandate had ended, making this one of the first flights on this route without masks. Shortly after boarding an announcement from the crew reassured passengers informing them that fresh air fills the cabin every three minutes, minimising risk of transmission. This was a nice touch for those who may not have travelled without a mask  since before the pandemic.

The seat: My seat, 50D, was in the front section of the Economy cabin. It was spacious and had notably comfortable legroom compared to my other recent long-haul flights. I had a blanket, pillow and over-ear headphones, which offered a good quality of sound from ICE, Emirates’ Inflight Entertainment System (IFE). I was very impressed with the variety of content on ICE, and ended up choosing an audiobook to listen to – not something I would do often on the ground.

The food: Without exaggeration, the meal I was served on this flight was one of the tastiest Economy meals I have ever had. I had chosen to receive an ‘Indian Vegetarian’ meal on the Emirates app a few days before my flight. I was served a lightly spiced paneer curry with rice, with a side of potato salad and an Indian desert, with cheese and crackers and a bread roll. My only criticism is that the food was not labeled, so I cannot give accurate names for the dishes. I have come to expect clear labelling on food with the rising focus on allergens onboard, so this was surprising. Nevertheless it was delicious and very filling.

A couple of hours before landing we were served an afternoon tea with a small scone, clotted cream, jam and cheese sandwich. This was also enjoyable, and even the tea was of a good quality – which it so often isn’t onboard!

The service: Crew were welcoming, attentive, and I even caught them taking a polaroid picture of someone at the front of the cabin who seemed to be celebrating a special occasion. I had noticed them do the same on the way out, but at the time didn’t realise it was initiated by the crew. A nice touch!

The verdict: No complaints here. Efficient service, enjoyable entertainment and a truly delicious meal reflected the push to quality that Emirates always champions.