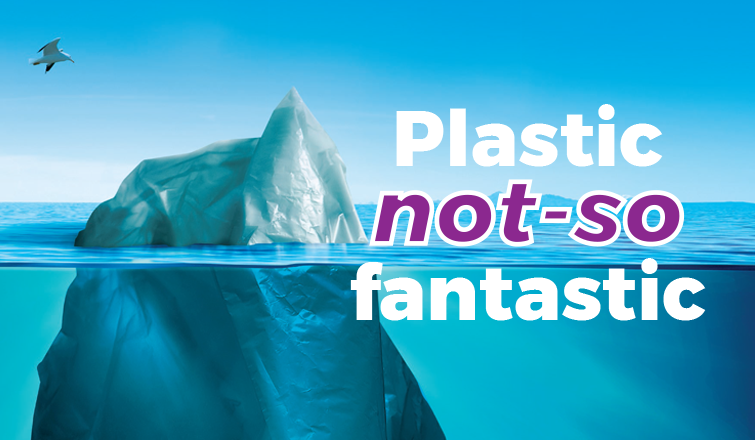 If there’s one subject that’s really pierced the public’s consciousness in 2018, it has to be plastic pollution. In the UK, this sudden, seemingly universal preoccupation was, in part at least, spurred by a BBC nature documentary which showed a mother whale clinging to her dead calf, poisoned by plastic ingested from her milk. Ever since then, the number of press releases Onboard Hospitality receives about plastic and how travel and catering companies worldwide are trying to reduce it – by ditching single-use straws or rewarding people for not using disposable coffee cups – has risen exponentially.

And it’s not just the UK by any means. Alaska Airlines became the first U.S. carrier to ditch plastic straws and cocktail sticks this July, and Nordic cruise line Hurtigruten banned all single-use plastic the same month. Even since I started researching this feature, American Airlines has announced it will now use bamboo drink stirrers and biodegradeable straws. But solving the problem of plastic pollution isn’t easy and although banning straws is a step in the right direction, it’s the tip of a huge and growing plastic iceberg.

Low-cost carrier Ryanair has vowed to become entirely plastic-free by 2023 but for full-service airlines who offer more than just a snack and a drink it’s not that easy. For long-haul services in particular, stringent regulations exist to stop contamination from overseas pests and diseases and these prevent the recycling of anything that has touched meat or dairy products, i.e most airline meal trays. And even for plastics that don’t, the chances of them being recycled are largely dependent on where the plane lands. Airlines can do everything in their power to separate recyclable waste but if the destination airport doesn’t have the facilities to process those products then it’s all to no avail. 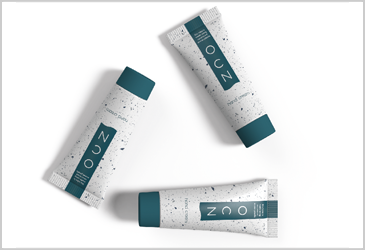 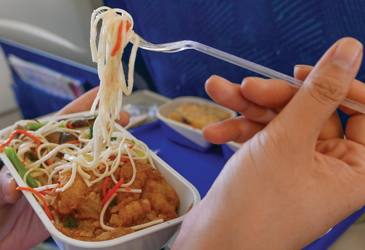 A ban on the most prolific single-use plastics (SUPs) found on Europe’s beaches has now been officially proposed by the EU and it looks like the intention is to push the legislation through before the new parliament starts in spring 2019. If applied to airlines it could cause significant upheaval. Fabio Gamba, md of the Airline Catering Association, says it’s a commendable move but also a political one: “There is growing consensus, quite rightly, that something needs to be done about plastic pollution in the oceans and successfully implementing laws to tackle it is good PR for the EU and those MEPs who aid the process,” he says.

But, Gamba points out, the impact assessment done on the ban was 250 pages long but didn’t mention the airline industry once, despite the fact that a ban will potentially have a huge effect on the way carriers do business. The choice for going ‘green’ is a mind boggling one as every solution seems to propose more questions.

Galileo Watermark won a Future-Scoping Business of the Year Award from Onboard Hospitality this year for its clever repurposing of marine plastics into containers for amenities. It is committed to offering airlines practical eco options and urges them to focus on doing something positive to address the problems.

Passengers like to see something they’ve been given is made from recycled plastic, but a bigger issue remains. Can it be easily recycled again? The stark fact is that plastics can only be recycled a few times before they’re downcycled into something which will end up in landfill – unlike metal or glass which can be recycled infinitely.

Natural materials like sugar cane sound great but does the process used to mould them sap more resources than the plastic it replaces?

New materials like bio-plastics are compostable but how dependent is this on high-tech processes which aren’t widely available? And is it truly safe?

This year deSter revealed its new offering, a simple range of three options to help airlines take a step towards being green, but within their own operational constraints and budget. The first option utilises already recycled materials, one uses completely biodegradable bagasse and one is a bio-based range made from PP plus bio materials which takes less energy to produce.

Options are growing. Here’s our rundown of plastic and some of the replacements:

The most widely recycled plastic in the world, PET is used for bottles and packaging and is strong, light and flexible. But it’s made for single use and if used over and over, some studies claim it can leach chemicals and, if scratched, can harbour bacteria. PET can be recycled as fabric and Emirates’ on-going use of recycled PET inflight blankets by Buzz are expected to rescue 12,000 tonnes of bottles from landfill by 2019.

With a high strength-to-density ratio, HDPE is the most widely used resin for bottles, it’s commonly recycled into furniture, bottles and pipes. HDPE can tolerate high temperatures and is dishwasher-safe.

Similar to HDPE but less rigid and more expensive. LDPE is used for squeeze bottles. Its rigid version is commonly recycled but flexible LDPE (used for carrier bags) is less accepted at recycling plants.

Used for cling wrap, toys and window frames, PVC isn’t widely recycled and its use in packaging is declining. 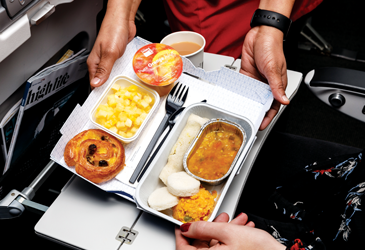 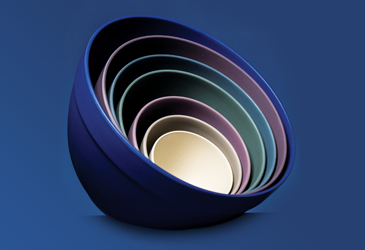 Being phased out by many companies, PS is most famous in its foamed form, for its use in packaging breakable goods, but is also used for food packaging in its rigid form. It’s notoriously hard to recycle and some studies have said it leaches so its image is bad.

Used for food tubs, bottle tops, waterproof clothes and bags, this plastic’s recyclability is increasing although it’s less widely accepted than PET, HDPE or LDPE. It can be repurposed for objects like crates and signal lights.

‘Items which decay naturally into harmless substances’ – the sort of rubbish put into compost heaps. Technically all materials are biodegradable (although a plastic bag takes hundreds of years and we can’t prove the process is harmess) so for practical purposes only those that degrade within a relatively short period are considered such. Many biodegradeable plastics end up in landfill where they degrade without oxygen, slowly and releasing methane, a greenhouse gas 23 times more powerful than carbon dioxide.

A broad term covering all plastics based on organic biomass rather than petroleum – but, and this is key, this can be wholly or just in part. Bioplastics can be derived from renewable biomass sources, such as vegetable fats and oils, corn starch, straw, wood chips and food waste as well as agricultural by-products and used plastic containers using microorganisms. Many bioplastics are biodegradeable, in theory.

Corn-based packaging made with polylactic acid (Pla) is a popular bioplastic used by some of the world’s biggest food brands (Wal-Mart, McDonald’s, Del Monte). It looks identical to PET and, if it’s treated right, is biodegradable. In 2008, British eco-responsible brand Innocent announced it had stopped using Pla because commercial composting was “not yet a mainstream option in the UK,” and this is still true.

Joint winner of our Future-Scoping Business of the Year Award, Matrix is creating Bio Form products in an airline-exclusive deal with plastics specialist Breakdown Plastics. It uses an organic additive which can be added to every type of plastic to accelerate biodegradation by creating an opportunity for microbes to use plastic as food and energy. Testing has shown up to 24.7% biodegradation within 160 days in optimised conditions leaving just biomas and C02. It’s shelf stable and safe with food. Matrix has options for meal service, ​amenity kits (and tcontents) and textiles. Could this be the answer? Of course it costs, but Matrix believes buyers will recognise that the increase in cost brings inordinate value in terms of an airline’s CSR and environmental credentials. 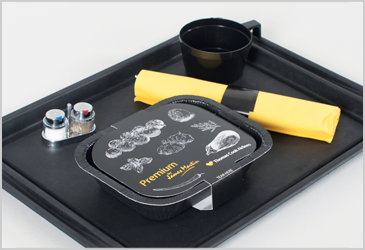 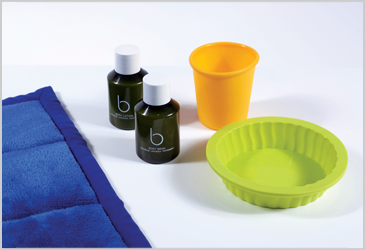 The pulp left after juice has been extracted from sugarcane, sugar beets, sorghum stalk, or agave. This fibrous plant debris is similar to wood pulp and as well as being used as a bio-fuel, the fibres can be used to replace plastic in food containers, as well as replacing products like tissues and boxes. Disposed of correctly it’s biodegradeable but landfills mean waste can’t access the air, moisture, and microorganisms necessary so it often won’t. Bagasse is waterproof and heat proof. WK Thomas won the Onboard Hospitality Award for Sustainability for its black bagasse tray making eco look cooler.

There are no easy answers! But as long as airlines are clear of the pros and cons and consciously endeavour to make responsible choices, there is hope for a healthier planet •

The Airline Catering Association (ACA) welcomes the EU’s move to ban single-use plastics (SUPs) but there are questions to address.

“The most obvious replacement for disposable plastic plates is rotable plastic but EU legislation also dictates that catering waste from outside EU borders is incinerated or buried in landfill so that wouldn’t make sense and incinerating rotable plastics or other replacement materials may cause even more harmful emissions!

“One of the reasons that airlines chose SUPs is that they are lighter, less weight means less fuel and less emissions – enforcing this change on airlines is not necessarily an environmentally-friendly move.

“Even if we found a light, reusable or recyclable alternative you must consider that all materials touching food have a finite life cycle and that recycling itself uses lots of energy.

“In addition, would this apply only to airlines flying within the EU? What about planes landing in the EU from the U.S., or heading out to Asia?
“Switching to rotables would be a logistical challenge for caterers. But it will be up to the airlines to decide how to deal with it – with choices ranging from rotable to recyclable plastics, non-plastics to no catering on short-haul flights.

“The latter would be a nightmare scenario for the catering industry, but we remain hopeful it won’t come to this since passenger experience is the main differentiator in this industry.

“If the EU’s directive is to eliminate marine litter then the airline industry, which doesn’t contribute to this at all, could be exempted.
“But we don’t want to shy away from our responsibilities, nor use economic arguments that would rightly be rejected. We simply want to ask questions and assess feasibility.

“I don’t want to see a law rushed through without consequences being considered. After all, it’s not just plastic which impacts the environment.” 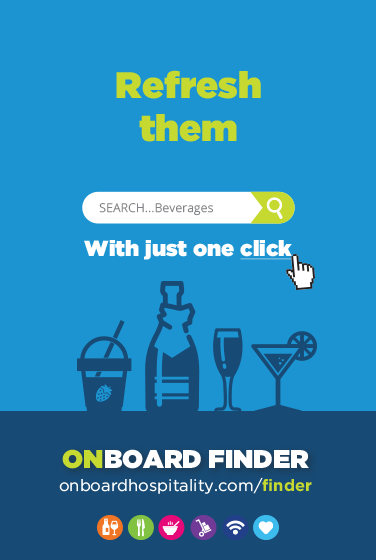