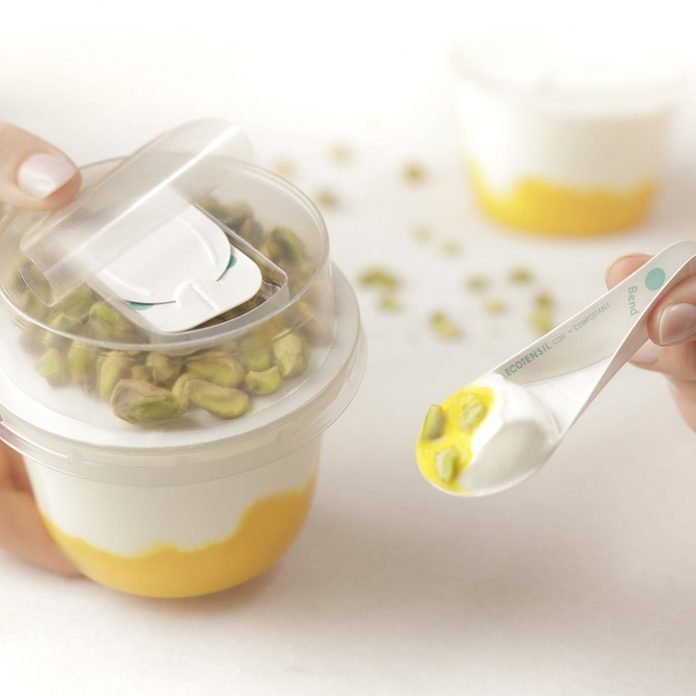 “Food manufacturers and foodservice suppliers quickly embraced EcoTensil’s ultra-compact AquaDot folding ‘multi-tensils’ as a ready replacement for plastic,” says EcoTensil CEO Peggy Cross. “They have done so because its satin-smooth surface has a more positive impact on the taste of food than wooden cutlery, it works seamlessly with existing packages, and significantly outlasts any other folding paper utensil we have tried.

“Certified as plastic-free by the reputable Din Certco institute, EcoTensil’s AquaDot products are the only utensils made from the only paperboard recognised and certified as being 100% plastic-free across Europe. They carry the prestigious Flustix Trustmark, which guarantees a product is plastic-free, meeting all the testing criteria for the EU’s Single Use Plastics Directive.

“Exempt from the upcoming UK plastics tax, and also available hygienically and compactly wrapped, you can trust EcoTensil’s AquaDot range is pleasing to use, compostable, recyclable, BRC, and above all plastic-free,” Peggy Cross concludes. “That benefits our customers and their customers, and most importantly, the environment our children will inherit.”