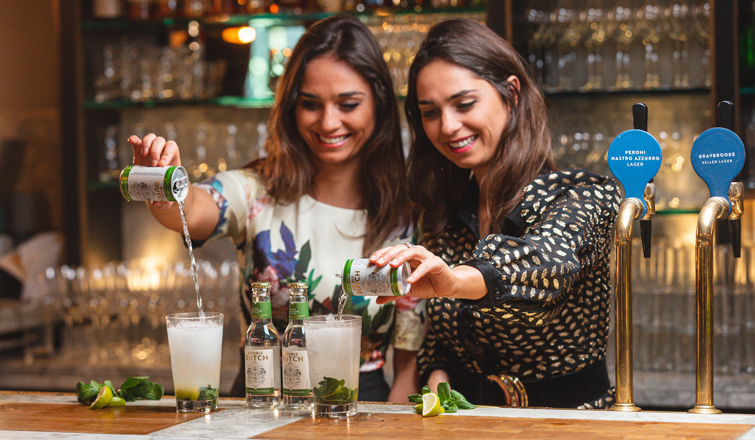 Joyce and Raissa de Haas are the young twin sister co-founders of award-winning UK premium drinks brand Double Dutch. This dynamic duo were just recently featured in The Telegraph’s ‘2019 Top 50 Most Ambitious Business Leaders in the UK’ as well as earning a spot on the prestigious Forbes ’30 under 30’ Europe List.

Originally form the Netherlands, they live and work in London and founded Double Dutch Drinks due to their frustration by the lack of innovation for high-quality and low-calorie mixers.

Low in sugar, 100% natural and vegan-friendly, the twins use molecular gastronomy to create their award-winning flavours such as ‘Pomegranate & Basil’ and ‘Cucumber and Watermelon’.

Since launching in 2015 they have received numerous taste awards and accolades, including a Foodpreneur Award from Sir Richard Branson. They currently sell half a million bottles per month and export to 25 countries around the world with an aim to become carbon neutral, and are carried in Waitrose nationwide, Ocado and Amazon and on the menus at luxury hotels and restaurants across the UK.

How did you get your break in the onboard sector and how easy was it?

I would say it’s a mixture of getting early credibility through receiving multiple taste awards and recognition from people such as Sir Richard Branson who endorsed Double Dutch. We also put our focus into a niche segment and area by building Double Dutch in London’s West End and targeting the top end of the On Trade, by reaching out to high quality restaurants and bars in the local area. This made our presence and distribution seem bigger, as our customers were in a concentrated area. It wasn’t easy at all to break into the sector, but hard work and persistence along with having a great product we believe in, was our cocktail for success.

Have you struggled to be taken seriously as women entrepreneurs?

When we started Double Dutch, it quickly became clear that the food and beverage industry was a very male-dominated industry. We had to work around this by working extra hard. Gradually people appreciated our passion for the brand, and it became an advantage that we were one of the few women in the industry. People became curious to meet up, and we used this opportunity to pitch our story as much as we could. We never gave up. Eventually, you will meet someone who can give you that much-needed break. It’s all about the learning process, and it’s good to know what plays to your advantage and what can separate you from the crowd.

How did you find networks to help you?

I think one of the biggest hurdles we had to overcome was not knowing anyone in the industry and getting our first customers without having any track record or endorsement. The solution we found was to use the resources around us. When we decided to raise our first investment round, we really had no clue where to start and how to find the right investors. To overcome this, we decided to make a list of the top 20 people we’d love to have invest, basically anyone we thought could add value to Double Dutch. We approached them via LinkedIn and found that a lot of them were open to grab a coffee. In fact, our first round of investors all came from LinkedIn, and it is really a great mix of people who all have different assets to bring to the table. Building the right network is probably one of the most crucial things when starting your own business.

Do you have any key landmarks that got you on your way?

While at university, winning the UCL prize for our dissertation gave us our first break as it came with a cash reward and so was effectively our first investment to create our initial product run. Subsequently being recognised with a Foodpreneur award by Sir Richard Branson was a huge moment for us as it enabled us to talk about our business and brand with conviction and credibility.