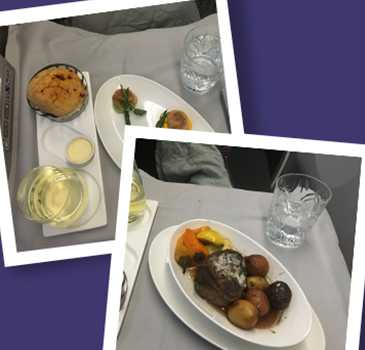 THE FLIGHT: I was travelling in Business on British Airways departing 16.55 on the BA283 operated by a 787 Dreamliner. The flight was pretty full, operating just after the chaos caused by the two-day pilot strike.

CHECK IN: There was a small queue when I arrived at LAX check-in but the staff were friendly and efficient and processed us all in quick order helpfully explaining the routing to security and the lounge. The lounge was comfortable and welcoming with plenty of seating, although the self-service catering was relatively basic. There was a staffed bar.

THE SEAT: My seat was 13A, a backward facing, window seat right over the wing which ensured a spectacular view on take-off as the unique shape of the Dreamliner wing underscored the L.A. mountains and coast line. The seat itself sported the smart grey herring-bone fabric finish of the new interior design, set with white headrest and pillow with the trademark BA swish in silver. The White Company bedding set was on the seat and the white centenary amenity kit was presented by the stewardess. Touch controls on the window dimmed out the blazing sun and once in the air the drop down footrest, fully-recline seat and privacy screen all created a comfortable and secluded-feeling retreat. USB points, plug sockets and seat controls were all easily accessible. There was an adjustable reading light and good-sized pop out screen and drop down table.

THE SERVICE: Champagne and a bottle of water were served on seating along with the menu and breakfast/wake up card which offered options for arrival – passengers could either be woken for food or left to sleep longer. After take off a hot towel service came promptly and meal/drink orders were taken. My drink was served on a neat black oval tray with a nuts mix in a small white china bowl. The steward brought the wine bottle to the seat, presented the label and offered a tasting before serving. The menu choices all sounded appetising and I opted for scallops with asparagus and fillet of British beef. Both were tasty and the main course was of a significant size. All was prettily presented with white table cloth, silverware, cut glass and fine white china. As most of this flight was subsequently in darkness, the crew was largely unrequired as passengers settled amongst their White Company seat liner, duvet and blanket to sleep, but were ready available with additional water, and happy to engage with those who wanted to chat. Breakfast was served 90 minutes before landing for those who had requested it with warmed pastries, yoghurt with spiced fruits and hot options all available. The mug of steamy English Breakfast tea was particularly appreciated after a week in the U.S.!

THE VERDICT: The Dreamliner cabin sets an airy and spacious stage for the new British Airways Business offer and the seat design and catering matched, feeling fresh and well presented. The tone throughout the design and service delivery felt business-like and professional with well thought through, user-friendly touches rather than an emphasis on sumptuous luxury. All in all it was a great flight with much improved comfort and quality on many of the key touchpoints and an engaged crew..